This is purely subjective. It’s not philosophy.

When you think of yourself, you probably envision a you at the bullseye of a circle that’s made up of different parts.

The most common representation of this view has a spiritual part that advices you to meditate and take long walks in nature. A physical part with some health related activities that you must do. Like exercise three times a week and eat healthy. And several other parts with their corresponding tasks that are supposed to increase your potential and reinforce your purpose.

This you-centric view is extremely common and variations of it are encouraged by popular books like The 7 Habits of Highly Effective People.

But this view has some potential problems.

First, it centers you in the middle of it all. As you workout and meditate and do the rest of the activities consistently over years, it will increase the resolution of the you in the center. You become the fit, contemplative person. 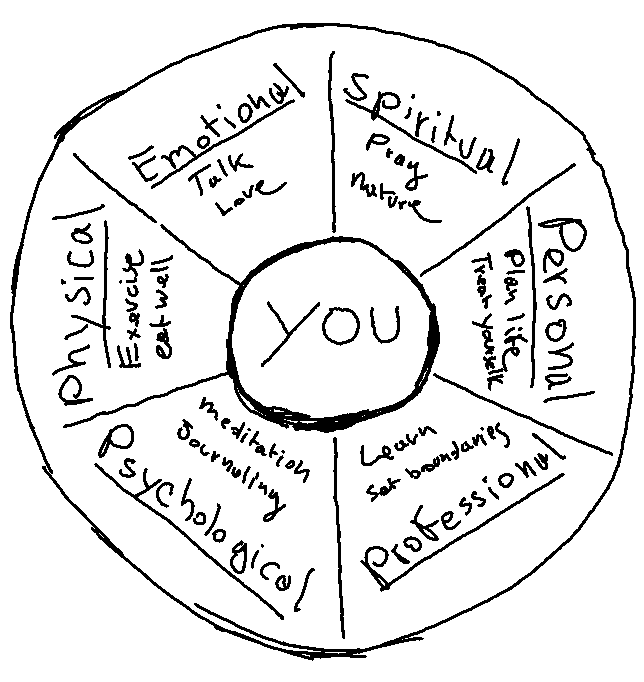 The problem with that identification is that as soon as you can’t do the things that you thought made you you, your identity is shaken.

Second, it is overwhelming to be the conductor in the center running the whole show at all times. You have to tend to all the tasks and activities that your parts demand. And not tending to them as planned feels bad. Almost like you are losing yourself.

Finally, the you-centric model does not match with how things really feel. Observe yourself in the following situations:

Do these feel like the same you in the center, but with a different mood? Or the do they feel more like a completely different person? Different not only in thought and feeling, but also in behavior and body language.

A friend of mine, a doctor, recently described to me a situation which encapsulates all the problems with the you-centric view.

She said that whenever she’s with a patient, she feels like a fraud. She has to abandon her true self, the fun and loving person that she knows she is and wear a mask. The mask hides her and shows a matter-of-fact and an emotionally disconnected doctor. She can’t show her fun side because her patients are usually in very serious conditions. And she can’t show her love because she said that it could affect her judgement.

Solar system math pre Galileo was littered with many complicated exceptions in order to justify the sun’s orbit around the earth. All those exceptions became unnecessary after his discoveries. Things naturally fell into place without the need for exceptions.

Instead of the you-centric view, you may want to consider viewing the world from the perspective of one of a multitude of selves. Each with its own wants, needs and disposition.

One way to start experimenting with this view is to notice which set of cohesive behaviors constantly show themselves in your life and name them. For example:

Once you’ve named them, then it becomes easier to notice who’s in charge of your world at different times.

In this model, there is no a center you running the show. And there’s no single self in charge at all times. There are just these different selves that you’ve named and each is in charge in different contexts. It’s very dynamic.

After playing with this for a while and being able to easily tell which self is in charge, you can take things a step further. You may experiment with actively summoning a self that is suitable for a specific situation you’re in.

An acquaintance of mine is an engineer that works on projects that impact millions of users. At times, he has to perform mission critical tasks while a dozen colleagues are watching every step he’s taking. He said that these situations always start with the wrong self in charge. It’s usually the Professional Self that wants to maintain a certain image, or the Over Cautions Self enumerating in his ear all the bad things that could happen. He said that he has to actively take a step back and invite the Engineer Self to take the floor. The calm, stoic and calculating self that can run the show with steady hands.

As you can see from my friend’s example, naming selves and learning how to summon them for their proper role, implies an interaction between the selves. It’s a dynamic partnership, where when one is needed, they take charge, but they’re not hungry for power. They give up the floor when they know another self is better suited for the role. 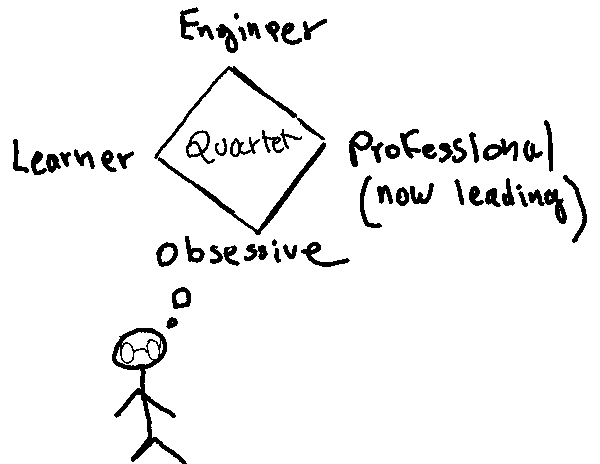 When you’re able to clearly observe the interaction between different selves and which work well together, you may start grouping them into duos, trios or quartets of selves. Each member of the band holds the fort when they’re needed and gracefully gives it up when another member’s abilities are more suitable to the task at hand. The band, the collection of selves, is how you interact with the world during extended contexts.

For example, if you’re an engineer, when you’re at work, your Work Quartet might include the Engineer Self that handles the technical tasks. The Professional Self that handles teamwork and career planning. The Learner Self that manages technical and general growth. And you might have an Obsessive Self, the one that stays up all night obsessing over solving a problem and annoying all the other selves. Ideally, each of these take control when it’s their proper time, but sometimes, the wrong self is the one in charge and you might not be able to do much about that.

My doctor friend at the beginning of this article viewed the world from a you-centric angle. Her you in the middle was a doctor that is supposed to behave and act in certain ways. Anytime she veered from that image, she felt like she’s not being herself. She felt overwhelmed with the plethora of things she had to do to maintain that you.

If she adopted a multi-self model, when at work, the Doctor Self might take leadership when emergencies and prognoses are called for. The Empathy Self takes the floor when a patient is describing his pain. The Playful self might show up when the patient is in recovery and things are looking good. And when she gets home, the Pet Mother Self plays with the dogs and walks them and The Writer Self might continue working on her article.

The right self in the right place at the right time.

If this is making sense to you and you can experientially observe it, then a very curious question comes up: who is really you?